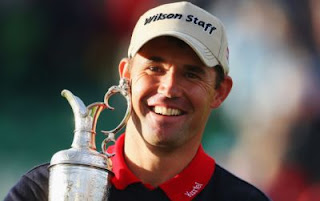 There’s a big party still going on in and throughout right now. In case you didn’t know, an Irishman, Padraig Harrington, won the Open Championship on Sunday.

The PGA Tour’s season runs from January (in ) through the first week of November (in ). There’s at least one tour event every week. There’s more than just one professional tour: there’s the Nationwide tour, the Champions tour, the Ladies PGA tour, the Asian tour, etc.

The PGA tour has (by far) the largest purses, thus they draw the world’s best players.

So, there are 4 events they play ever year on the PGA tour that are called ‘majors’.

They play the Master’s every year in , and then the US Open, usually around Father’s Day. Unlike the Master’s, the venue for the U.S. Open changes every year. Next year it’s going to be in , Torrey Pines…yeah, I’ve played that track.

I love golf. I was down with golf before Tiger Woods was a household name. I started playing golf even before Tiger Woods enrolled at . And since I’m a black golfer that’s a Stanford graduate, people always ask me, ‘Do you know Tiger?”

Which reminds me, so you have 4 majors in golf every year. The Master’s, the U.S. Open, the British Open and the PGA Championship.

I refer to it as the British Open, but its real name is just the Open Championship, since it was the first established event of all the 4 majors. The US Open came later, but now most people say British Open for specificity.

Even though I’m an American, I have no problem whatsoever recognizing real, and the Open Championship’s roots are right in the midst of the birthplace of the game of golf.

You can’t knock those blue bloods for having the history on us nouveau Americans.

nda of courses throughout the .

This past week they were in , at the famed Carnoustie golf course.

Not as old as , but definitely more nasty.

Instead of flying the ball to prescribed spots with forced carries and tree lined fairways, links style golf affords a lot more choices.

And the seaside terrain that has been shaped over the centuries by seaside breezes coming off the Firth of Tay, causes the fairways like Carnoustie to be full of humps, bumps and undulations.

You don’t know what your ball is going to do, depending on how it lands. It could bounce left, or right, or pitch forward or fall into one of those deep man eating pot bunkers.

Many players lament their unlucky fate bestowed upon them by the ‘golf gods’, due to a bad bounce or unfortunate roll, but in the end the Open Championship demands the champion to be the most in control of his golf for 4 days.

Now as much as the Brits are smug about their place in the history of golf, they haven’t had a Brit, or a European for that matter, win a Major Championship in 8 years.

(ahem..excuse me for getting 'caught up')

The Americans have been running the table at the Open lately and coming into this year’s event, Tiger Woods had won the last 2 in a row and was seeking to gain elite company in winning 3 in a row.

Tiger couldn’t quite keep it together this week and the final day saw the young Spaniard Sergio Garcia aka El Nino, walk up to the #1 tee box on Sunday afternoon with a 3 stroke lead on the field.

Sergio is animated and emotional.

The last time they played at Carnoustie in 1999, Sergio shot the first 2 rounds in the 80’s, missed the cut, then clung to his mother and sobbed on her shoulder profusely.

This year he seemed poised to win his first major, but alas it was not to be.

Padraig Harrington, cousin of the starting QB for the Atlanta Falcons Joey Harrington (we’ll discuss pit bulls and Michael Vick later), shot a stellar 67 in the final round, despite double bogeying the 18th hole and he made it into a 4 hole playoff with Sergio.

Padraig went on to beat Sergio by 1 stroke after the 4 playoff holes and he became ’s first major champion since. 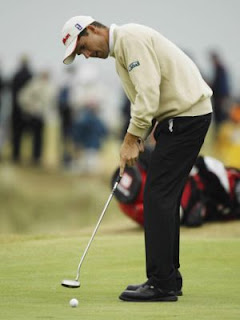 I like Paddy. He has heart and he has game.

I also like him because he’s a member of the cross-handed putting brotherhood.

For a right handed person, this means that the left hand is lower than right hand.

Putting cross handed is not considered a ‘conventional’ grip.

Putting is a personal thing.

There is no exact ‘right’ way to do it.

The key is, no matter how you stroke it, being able to repeat it, again and again.

That’s pretty much the same way I look at my faith.

The grasp I have on God and what the Scriptures say on what saith the Lord, may not be a conventional hold.

I didn’t grow up being a golfer, it’s a game that I never delved into until I was in my early 20’s. 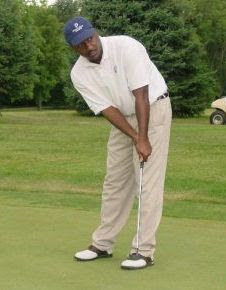 Even though I went to church regularly, I grew up being a peripheral believer in Jesus Christ. I never delved into personal Bible study until I was in my early 30’s.

But although our faiths are as unique as fingerprints, there are some fundamentals which are undeniable.

When putting, the most reliable stroke causes the ball to move on a tight straight end over end spiral.

When talking about faith in God,salvation and the hereafter, the fundamental truths are based on the death, burial and resurrection of Jesus Christ.

Now how you get there is completely up to you and God.

But for those seeking salvation and being able to pass into the presence of God when you make that transition into the spiritual world. Then there’s only one hole to putt to, and unlike the small 4.25" diameter circle of a golf hole, this hole is as large as the empty tomb.

I guess I find myself more cautious, because I sometimes wonder if I’m a good enough player to dare and try to show a novice how the game is to be played.

If you’re ever on the driving range and you have some smart az telling you 100 different golf tips on what you’re doing wrong, then sit back and watch him swing.

If he’s hitting shanks, snap hooks, dribblers and/or banana fades, then you already know he probably doesn’t know what the hell he’s talking about.

"Behold, I send you forth as sheep in the midst of wolves: be ye therefore wise as serpents, and harmless as doves" - Matthew 10:16 KJV 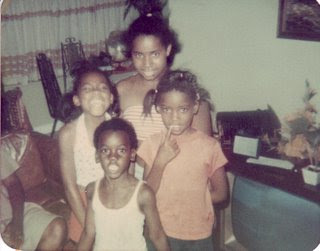 my Bible and attend regular worship services and Bible study groups with the intent of tightening up my grasp on the fundamentals of the faith.

I just have to pray for guidance, cuz I already know that I’m Naturally Crunk, which oftentimes comes across as being arrogant and/or rude.

"But he giveth more grace. Wherefore he saith, God resisteth the proud, but giveth grace unto the humble." - James 4:6

I’m striving to be more humble.

Padraig Harrington’s Open win is a testimony to hard work and dedication, pillars of Irish tradition and culture. And you couldn’t have had a more gracious and humble Open champion.

On top of that, an 18 year old Irishman won the award for the low amateur at the Open. Like I said, the party is still going on in ..more haggis and stout for everyone!!!