One of the main things I’ve learned from almost 3 years of being an ‘out of the closet’ writer, is that no matter what you push out on ink, everybody ain’t go like it.

And once I got over the fact that some folks are going to think my style is wack, then I had to break through the tendency of playing up to the crowd.

I had to restrain myself from falling into the rut of writing what the masses are fiending to read.

It’s easy to fall into that trap, cuz everybody is susceptible to applause. It’ll make you want to start grinding harder to get some more hand claps.

But one of the key pieces of advice I got early on in the game, was from my Aunt C. From her days of singing in a church choir, to being one of Ray Charles original backup singers, to performing on the 'chitlin circuit' jazz clubs, she’s been in the public eye for over 30 years now. So of course I had my ear tuned in to listen to the words of advice she had for me because I respect her journey. 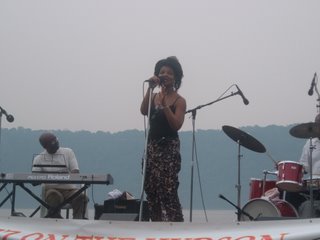 “I’ll tell you like a guy told me when I first started out nephew…don’t buy the pig.”

“It means, once you start getting some good press clippings and reviews, don’t buy into it. Because that will make you complacent and it will make you a slave to what the masses want to hear. You have to be in tune to the inner you with the art that you are creating. Don’t ever let others dictate that..YOU control that.”

It took me awhile to really figure out what that meant. There are some pieces I have written which have been widely well received, like Hittin Licks and there are others which made me feel like ducking for cover from all the salvos that got thrown my way, like the On the Down Low Book Review.

But through it all, I know that I’ve stayed true to my God and true to my native land, just like the last verse of the Negro National Anthem, “Lift Every Voice and Sing.”

Some folks get a bit disgruntled when you bring up the ‘Negro’ National Anthem.

“Why do black folks have to have a separate anthem?? How come they just can’t have the AMERICAN anthem like everybody else???”

Of course, when I remind them that when the American anthem was written, black folks weren’t even considered American citizens!! Even though African slave descendants had been here for generations, we still couldn’t vote. So why would you expect someone who is counted less than a human by the United States government , to stand up and sing, ‘for the land of the free??’

That’s when a lot of them cock their heads sideways at me and mumble something about me being one of them ‘uppity’ Negroes. You damn skippy.

So now one of the hot topics of the day are theUnited States immigration laws. People (mostly Latinos) are protesting and having marches, walking out of school and work, raising noise because they don’t like the proposed changes.

On the other hand you have people (mostly white folks) adamant against letting more illegal immigrants into the country and intent on punishing the ones that are already here.

This topic poses an interesting situation to the Arican-American slave descendent. Because no matter the issue, the first thing to look at is what side of the coin you live on in the debate. Those who are illegal immigrants or who are descendants of illegal immigrants ain’t trying to hear no sh’t about being fined, charged with a crime or deported back to their country of origin.

White folks (who’s ancestors immigrated at some point in time, but their argument is that they did it LEGALLY, filling out the required paperwork) are ready to punish all the ‘law breakers.’

So when you think about it, the only people who didn’t ‘voluntarily’ immigrate to America are Native Americans and African slave descendants (i.e. Black folks).

I sent out an email a couple of weeks ago to a few people in my close-knit circle of friends. It had this quote from Teddy Roosevelt regarding immigration, from back in the early 1900's.

Theodore Roosevelt's ideas on Immigrants and being an AMERICAN in 1907.


I really don’t think that the person who sent ME the email realized that I wasn’t white, but I passed it along to some of my fellow African slave descendants, just to give them a better understanding of how vehemently the ‘in’ crowd feels about this immigration thing.

Unbeknowest to me, one of these same podnas forwarded the email to his entire distribution list and I ended up getting a couple of emails from Latinos who were a bit pissed off to even receive it (even though I wasn’t the one who sent it to them!)

But the whole deal made me realize that the immigration issue is a very volatile subject.

Everyone wants to have pride for their heritage. That’s why you have whole communities in major American cities like Little Italy, Germantown, Chinatown and the like. But it seems that that’s only okay if you’ve already been here for a few generations. Because as soon as someone raises up a Mexican flag, then all of a sudden they need to take their wetback az back to Mexico!!!

Now of course, Teddy brought up a good point concerning the language barrier. It’s different when you come here and commit yourself to learning the language and assimilating into the American culture. It’s completely different when you show up and just say ‘fkit..I can’t speak English and I ain’t trying to learn, so ya’ll gotta get my kids a Spanish speaking teacher and I want all the government services available in Spanish!!”

Of course, the immigration issue isn’t just about Mexico, it’s about ALL the incoming illegal immigrants into this country. But it’s funny how most Europeans have such an easy time getting in, but darker skinned people, like Haitians, Mexicans and Africans are shipped back by the boatload.

It all comes down to paperwork, time and money.

Those who take the time to fill out the paperwork and go through the process are usually the ones who already have resources. But those who are dead broke without a pot to piss in and they’re coming here trying to make something in life are going to do it by any means necessary. Risking life and limb crossing hot deserts, swimming across shark infested waters, being locked up in smuggler trailers for days at a time. As much as the world talks down about America EVERYBODY is trying to get here!!!

So what do we do?

I don’t know the answer to that question.

This nation was founded as a haven for people who were seeking a better way of life. But now that those people are here and in place and in control of the laws, the game done changed homey.

The Pilgrims didn’t have any immigration paperwork to fill out, they just showed up and set up camp. Get in where you fit in fool.

But now the game has flipped, where you have to consider the responsibilities the American taxpayers have to our healthcare, welfare, criminal and education system. We’re at the point where all four are jacked up, overcrowded and almost bankrupt and a lot of that is due to the increased burden caused by illegal immigrants who don’t pay any taxes.

No matter what solution I might come up with, I know I would feel differently if either myself or a close family member was an illegal immigrant. That’s as real as I can be.
Posted by Unknown at 9:12 AM