My thought patterns are not always in chronological order.

I can start thinking about stuff that happened 30 years ago, 2 months ago or yesterday.

I’ve got that other gear where I can start musing about stuff that ain’t even happened yet.

Now before you start thinking that I’m some kinda bona fide wacko..calm down. It’s not like I’m claiming I have a crystal ball and I can see into the future.

All I’m saying is that at some point, we all have to face the reality that the skin that we are in comes with an expiration date.

Some of us come to this realization after personal experiences that heighten our sense of Closeness to Death. 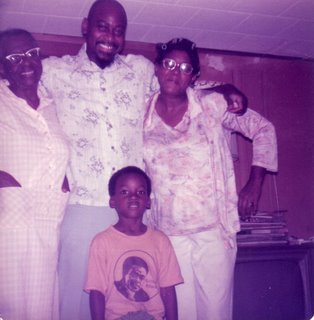 This also seems to happen when you go to the funerals of people you were close to.

The first time it happened to me was at my great-Grandma Bessie’s funeral when I was about 10 years old. The main thing I remember about that funeral, was that it was the first time that I had ever seen my father cry.

He wasn’t yelling and falling all over the casket or nothing like that. He just sat silently with red swollen eyes that started leaking tears from the edges. He took out his handkerchief and dabbed his eyes from time to time. But if you weren’t looking at him, you wouldn’t even know that he was crying.

When I was in my early teens, one of my Sunday School classmates was found murdered in his house, along with his parents and older brother. It was a sobering experience that taught me you didn’t have to be old to die.

My most recent front row experience was at my grandfather’s funeral 4 years ago.

I was one of his grandsons that served as a pallbearer for his casket. At least, I w 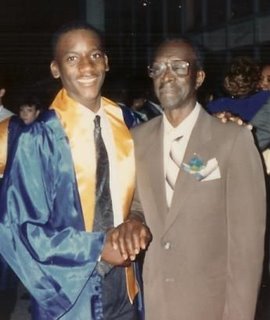 as supposed to. That’s why they had my name on the program. But I never even made it to my station to assume my role of holding the casket rail during the recession.

Somewhere in the middle of my cousin Jamar singing a Spirit filled rendition of ‘My Soul’s Been Anchored in the LORD”, my whole essence disintegrated into a billion pieces.

I can’t even tell you what I said, what I was thinking, I don’t know if I was yelling, I don’t even know if my eyes were open. All I know is that I was ‘caught up’. Almost as if God came down and scooped me up and took me to another place.

After I came down and came ‘to myself’, I felt salty and I realized that my face was covered in tears.

As this euphoric lift began to wear off to a low buzz, I began to entertain a sense of self-consciousness and I looked around to see if the whole church was staring at me cuz I had been acting ‘weird’.

Obviously I wasn’t the only one who felt that wave that rushed through the church, because it looked like everybody else was crying too.

In retrospect, the whole experience gave me a lot lower tolerance for dealing with bullshit. Life is short mane, why waste time dealing with trivial bullshit???

Unfortunately, this was just a jumpstart to my experiences with loved ones who pass away to that other side. 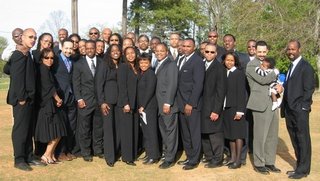 My podna Okokon B. Okon III was murdered in and the Stanford family huddled closer together to mourn his loss on a brisk, but sunny day.

Since then I’ve served as a pallbearer in several funerals, Uncle Francis, a man that I refer to as a true distinguished g 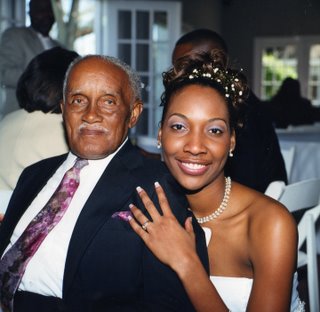 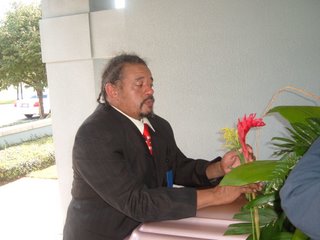 My Aunt Pearlie Mae, probably one of the greatest cooks that eve 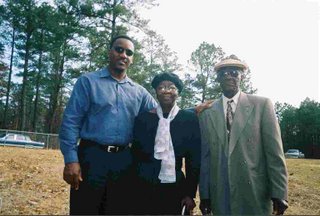 Some of my close podnaz that I grew up with since childhood had close losses in their families. Their mothers and fathers, wives. And whenever I could, I made sure to be there to lend support. A hug or just a silent nod of acknowledgement and concern for the bereaved.

Most recently this past year, I’m still coming to grips with the losses of 2 peopl 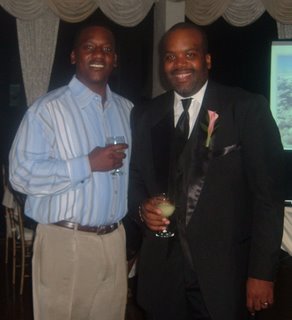 e who were close to me in my life.

My podna LaGette Kemp checked in for his long long flight this past year. It was no surprise to any of us, when we found out he had an enlarged heart. I always knew Gette had a bigger heart than most folks, you could tell by how he treated people. 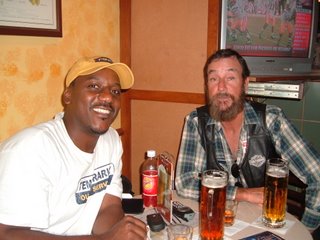 Then my co-worker and friend, Larry Childers checked out one Monday morning right after he had arrived to work. It shook me up that much more. Larry and I had traveled to different countries together and shared many stories while riding on the highway, along with popping many tops of ice cold beers ­. I miss Larry a lot, because you could talk to him about anything, politics, religion, the Bible, guns, electronics, motorcycles, cars, world history, ..Larry was a true Renaissance man.

One of the strangest requests I’ve received, was from this guy who had been reading through my portfolio that Curvey keeps in his barbershop…

“I want you to write a story for my funeral program.”

“You know how they give a description of people’s lives and stuff in the program for funerals? I want you to write mine.”

I was a bit taken aback by that one. Not so much that I didn’t think I could do it, but rather for the fact that I know I still have work to do to complete my OWN eulogy.

There’s many people who live their lives as if they have no one to answer to in the end. Many agnostics and intellectuals refuse to believe blindly in anything that they can’t see or touch with their own hands. It’s kinda like I heard one person tell me after I explained to them the Christian view of death, judgement and the afterlife…

There is a leap of faith that we all must take in life.

At some point, you’re going to have to believe in SOMEthing.

I’ve already placed my whole stack of chips on Jesus, because I believe that He is the Way, the Truth and the Light. Because I believe that we all must appear before the judgement seat of Christ (I Corinthians 5:10), to give an account of ourselves and how we received the Gospel message. It is a truth that is not only prevalent throughout the Gospels and New Testament, but also the Old Testament of Scripture. Most vividly illuminated by the wisest man to ever live, King Solomon, when he penned the closing verses for Ecclesiastes..

“Let us hear the conclusion of the whole matter: Fear God, and keep his commandments: for this is the whole duty of man. For God shall bring every work into judgment, with every secret thing, whether it be good, or whether it be evil. “ - (Ecc 12:13-14)