Learning from the Book and Eli 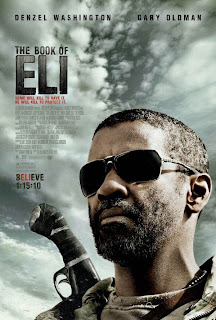 First of all, let me say, I'm not a movie snitch. Those who have read my only movie review posted on http://www.servinemup.com/, Dirty Pretty Things, know that I'm not one to spoil the movie for others who have not seen it. Unless of course it's a movie that's been out for over 20 years, then all bets are off.


As a mater of fact, at the time of this writing, I haven't even seen the other D. Washington's new movie, The Book of Eli, yet. But I am a Denzel fan, and my wife and I next movie date will more than likely be this movie.


I like Denzel's work. I think he represents himself well in his profession and in his walk as a man of God. Denzel is one of the few publicly professed Christian leading men in Hollywod. I always try to support those who represent for the Blood whenever I can.


Of course, some will look at some of his past movies and point out all of the characters/scenes that he's portrayed that don't seem too 'Christian'. One of my favorite Denzel movies was Malcolm X, but I thoroughly enjoyed Training Day too.
It's very easy for Christians to be boxed in to the gospel section of the bookstore. Held to a higher standard and criticized whenever we step outside of the 100% walk of our mentor and role model Jesus Christ.


As a writer, I've faced a lot of the same criticisms. But in the end, I know that we all must answer for the work that we do. For they shall surely follow you. But in the bigger picture, away from the screen, Denzel has handled himself very admirably. He's a money making black man in Hollywood that's married to a black woman. He gets a lot of cred in the black community for that.
So now his latest endeavour brings more attention to the Book, which is always a good thing. I believe the Word of God is the lamp for our lives. It's not something that was meant to be read only on Sunday morning during devotion or the sermon. God has always meant for us to meditate on His Word daily.


Of course, a lot of people start arguing over exactly which book is God's Word. There's a lot of faith's that claim their texts to be 'sacred'. But there is One that stands apart above the fray, the most read, most fought over, most disputed, most discussed, most debated book of all time, the Holy Bible.


Despite what some may think, King James of Scotland did not write it. He just commmissioned an English translation of it, that has stood out to be the most popular. But the original texts were written in Hebrew, Aramaic and Greek, and in these original autographs there is no error. I truly believe the Bible is God breathed and when you get into the history of the transmission of the Book, and how it has withstood centuries of translations, I stand by the prophet Isaiah's notes of God's dictation..


"So shall My word be that goes forth from My mouth; It shall not return to Me void, But it shall accomplish what I please, And it shall prosper in the thing for which I sent it." - Isaiah 55:11


I know everyone doesn't recognize the Bible as God's Word. Some scoff at it. Some try to completely ignore it. What's even worse is the one's who claim to represent the Word, but yet they never study it and their lives are lived in ways completely contrary to the Word.


There is no such thing as a Book of Eli in the Bible. Eli was actually a prophet/priest/judge in the Bible. He trained the prophet Samuel. And you will see a lot more about Eli and his role in God's plan starting in the 1st book of Samuel. The thing about Eli that stood out to me, was that although he was an upright and righteous man, he had 2 sons who were 'throwed off'. They were corrupt judges and priests, not a good look for those who are supposed to be representing the Blood.


What's even more interesting, is when you see how God handled not only Eli's throwed off sons, but how he held Eli accountable also:


12 In that day I will perform against Eli all that I have spoken concerning his house, from beginning to end. 13 For I have told him that I will judge his house forever for the iniquity which he knows, because his sons made themselves vile, and he did not restrain them. - I Samuel 3:12-13


Obviously, those who are claiming the covering of the Blood are held to a higher standard. If you know better, you're supposed to do better.


As a parent, it makes me more attentive to my duties of raising my children. I believe you can abuse children by being too strict, I also believe you can cripple children by being too lenient. It sets them up for failure, because they're not prepared to deal with the hard truths of the real world and the real Word. These deficiencies usually manifest once parents are not longer able to shield them from these realities.


My father always says that proper parenting is a very thin line. You can be too strict and you can be too easygoing and each child requires a different level of guidance. It's one of those things that will make you learn all you can from the Book and the stories within. We can learn from all the players in the Book, not just our role model Christ, even the one's who made mistakes like Eli.

Once you get to be close to 40, married, with chilluns..it's very rare that
you can find a moment where you can say, "I don't have anything to do" also
known as 'spare time'.

That's funny. I actually saw Robin Harris before he died when he hosted the
Bay Area Black Comedy Competition in Oakland in the late 80's. Jamie Foxx
won the event, but everybody who was there knew that D.L. Hughley should
have won it..but he made this joke about fags that a lot of the Bay Area
liberals didn't care too much about and he only got 2nd place.

Anyway...so I still get a LOT of inquiries about Servinemup Ink...

Have you posted anything new on www.servinemup.com lately? Nope.

Is the book out yet? Nope.

What's the deal?? I heard that you was locked up in jail on a dope case?
Nope..not me, that's my distribution manager Curvey, and I didn't have
NUTHIN to do with them 2 bricks of powder that he got caught with. 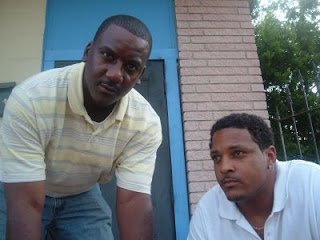 Actually, he'll be elgible to come up for parole in 2010. I'm still in
constant communication with him, I send him letters, pictures and commissary
money. I pray for him and I go see him whenever I can. And if you want, you can write him ,
Tommy Curvey, Inmate #01595625, Larry Gist Unit, 3295 FM 3514 in Beaumont, TX 77705. You can even go online and put
some money on his books at www.jpay.com. Like they say on lock, commissary
is NECESSARY!

2009 has been a year of moving to another level for D. Washington.

I've lost a few people who were very close and dear to my heart, but God has
also blessed me to have an addition to my family and you just fall in love
all over again. I will forever praise His name!

Privacy concerns had been the #1 issue I have been praying about.

Not just about me, but also for my family.

I look at President Barack Obama and just think about the willing sacrifice
he's made in his life. Not just him but his whole family will have to live
the remainder of their lives under armed security.

Haters are watching me, but they're not stopping me!

Being a public proclaimer of the faith has put me on a whole different level
of the game.

I appreciate all of the words of support and encouragement, the prayers and
the well wishes from people from all over the globe.

But I also know that this spiritual game that we're in is a lot more serious
than any dope game.

Drug dealers have to be cautious of getting robbed or jacked at every
transaction, buying or selling, just like they have to be on the lookout for
police, snitches and undercover informants.

The spiritual game is even more intense, for we wrestle not against flesh
and blood. You can't always SEE the enemy that is conspiring against you.

I know it may sound paranoid or maniacal, but I liken my journey much to
Maximus from Gladiator. He just wanted to be a farmer and enjoy his family.

I really just like to do my work, go home and enjoy my family. No worries,
no problems.

But once you enlist in the game, you're in it for life. Once you're truly
saved by Christ, He won't let go of you.

We are pardoned for our sins, and I do know the difference between pardoned
and paroled.

Some take this declaration of liberty as a free pass to do whatever your
heart pleases. But sin isn't free. We were bought at a price. A Blood
measure.

There is a lot of things about the Christian walk that I am still learning
about.

But I know that once you accept Christ as your Lord and Saviour, God holds
you to a higher standard.

Come as you are, but that doesn't mean you're supposed to stay as you are.

Salvation is not a static position, we should be moving, from glory to
glory.

And if you keep doing that dirt, hiding behind the shield thinking you're
safe from retribution, don't think God won't eventually grow weary and take
His hands off of you.

As many sins that can be absolved by leading others to Christ, just think of
the ramifications of those who weaken other's faith by their sinful
behavior.

God will give you over to a reprobate mind if you keep trying His patience.

That's what I've learned so far.

So for now, I'mma keep banging this ink against this paper.

One hitter quitters is what Curvey calls them.

Maybe if I could have gotten the books in his hand sooner so that he
wouldn't feel compelled to hustle on the street for money, he wouldn't be
locked down right now.

So for those who have someone on lock, whether behind bars in a state
correctional facility or shackled in the bonds of sin, don't think God has
forgotten about them.

Tupac wondered if there was a Heaven for thug ngaz, a stress free life and a
place for drug dealers.

Christ can prevail through the darkest situation, in crack houses and whore
houses, but once He comes into your heart..fo real..you won't be able to
stay there.
Posted by Unknown at 6:44 PM